It has been an ordinary day; rushing to work, doing experiments and rushing back to home to look after my dog, Sherlock… Right after reaching home, the first thing I do is grabbing a refreshing cleanser from my little Sephoshelf (that is how I call my cosmetics shelf. It looks like a little Sephora store). I can eat something at 8pmish. After, reading literature, designing experiments, talking to friends and it becomes almost 1am. Although after cleanser, skin moisturizer is a must, I wash off that moisturizer before going to bed to replenish it with another treatment which is preferably anti-aging, since this is the only time that I benefit from the prolonged skin care. 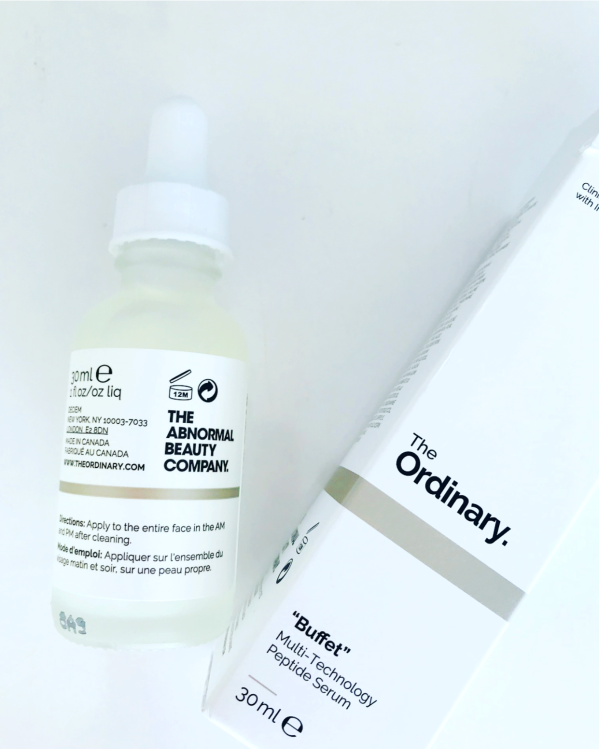 A year ago I have bought two products from “The Ordinary”, not because it has a catchy name implying the brand is “not” ordinary, but it was cheap. Yeah! A bottle didn’t even cost me 20 USD! Can you believe this? I doubted its quality at the beginning though. It was natural because my expectations were proportional to the price. After a week, I can’t really say that wrinkles are filled, but my skin looks younger and brighter. It definitely improved my complexion. Then I realized that it’s not only firmness that makes you look younger but also, and maybe more importantly, even and brighter skin tone.

The team behind the science of The Ordinary consists of competent people. The Ordinary is one of the sub-company under the name of DECIEM. The precious ingredients of Buffet were developed by and trademark of DSM, Lipotec S.A.U. and Sederma Inc., yet the “Buffet” concept that had combined all these complexes attests to an innovative mindset of the company. The buffet has almost 11 different amino acids that facilitates protein synthesis in the skin. Strikingly, the main ingredient, Matrixyl, has shown to increase collagen synthesis up to 350%. Its texture resembles snail creams with more refreshing essence. It replaced my expensive anti-aging creams with very promising and visible results. I will definitely keep buying it.